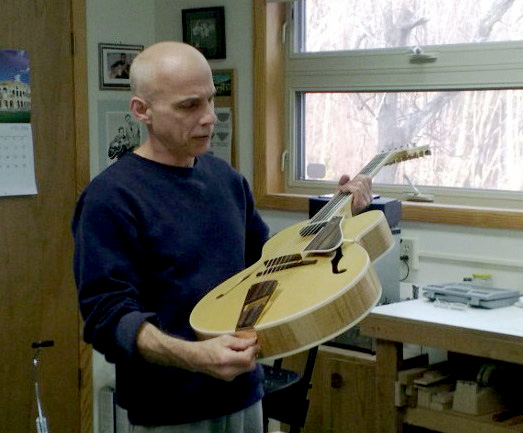 Mark Campellone was born August 29, 1954 in Providence RI. With an abundance of artistic talent on the maternal side of his family, and a father with a keen ear for music, Mark began at an early age to display noteworthy abilities in these two areas, both of which would be important to his future work as a guitar builder.

Mark began playing guitar at age ten, influenced by the Beatles and other popular music of the mid 60’s. Mostly self-taught, he played his father’s old Stella flattop for two years before getting his first good guitar – a Gibson hollow-body electric. As a youngster, while learning to play guitar, Mark also began to develop an appreciation for the instrument itself, particularly instruments like the Gibson L5 and Super 400. The early impressions made by these instruments would linger and later influence Mark in the design and construction of his own archtop guitars.

As a result of his father’s interest in music, Mark was exposed to musical styles other than rock&roll while growing up. The home record collection included everything from classical music to the pop and jazz standards of his father’s era, and with dad being a guitar buff, there were many recordings of fine guitarists playing in these styles. Listening to these recordings deepened Mark’s interest in playing guitar. Eventually, the challenge of playing jazz guitar became a strong focus for him, reinforcing his interest in the guitar associated with that musical style – the archtop.

Though he had considered an art related career, Mark finally chose to attend the Berklee College of Music. After one year of advanced studies there, Mark began working as a professional musician. Maintaining a strong interest in guitars led Mark to begin building instruments in the mid 70’s. In the years that followed, while continuing to work as a local musician, he built electric six-string and bass guitars and did repair work on both electric and acoustic instruments. This work included the repair and restoration of a number of vintage era archtop guitars, which provided the basis for Mark’s knowledge of these instruments and piqued his interest in building them.

His workmanship is, if anything, better than some of the (famous) Gibsons of the 1950’sGeorge Gruhn, Pres. Gruhn Guitars, Nashville, TN

Mark built his first archtop guitar in 1988.  Within a couple of years he decided to stop playing professionally to concentrate on instrument work, with the ultimate objective of building archtop guitars full-time.  Through the following decade Mark exhibited his work at various guitar shows where his instruments quickly gained the attention of archtop guitar enthusiasts across the U.S. and abroad.  Orders began to come in steadily and Mark was soon building archtops full-time.

Mark’s instruments have established him as one of today’s premiere builders of archtop guitars.  His work has been exhibited at the Smithsonian Museum of American History as part of the Blue Guitar Project and has been covered in numerous guitar related publications.